You are here: Home / Resource Hub / Our News / TIP US OFF

We have many reports of fly-tipping in forests and woodlands across England, Scotland and Wales.

The instance pictured below was an extreme case and part of organised criminal activity, it sends a clear message of the risks to the forest industry of illegal waste activities.

Recent BBC News has highlighted new plans to tackle what has been called by the Environment Agency as the ‘new narcotics’ of fly-tipping and waste crime. Proposals include a digital tracking system and increased assessment of contractors offering a waste carrier service.

Fly-tipping is costly to both the public sector and landowners to clear up. Local authorities, Environment Agency, NRW and SEPA have powers to investigate and deal with incidents but no obligation to clear waste – that tends to fall on the landowner.

The quicker waste is removed from site the better to avoid repeated fly-tipping or the indication that an area is infrequently visited or managed. 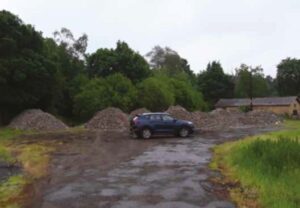 This photo shows 6 artic loads of waste dumped one night in a woodland property which cost in the region of £50,000 to remove from site

Fly-tipping is costly to both the public sector and landowners to clear up.

Waste must be collected by a licensed or registered waste carrier and taken to a suitable waste management site.

If you see anything suspicious around forests and woodland while carrying out work activities please let the forestry manager know. If you come across fly- tipped waste please always report it immediately to the forest manager. The quicker it is dealt with and removed the less environmental damage and the less chance more fly-tipping occurs.

Reporting to the Local Council

All fly-tipping should also be reported to the relevant authorities.

The GOV.UK website has a tool to for entering the nearest postcode of the fly-tipping to find which local council to report to in England and Wales (GOV.UK Link here). You can also find the local Scottish council using this tool.

However, in Scotland you can use the ZEROWASTE Scotland DUMB DUMPERS
Hotline or Website reporting tool – dumbdumpers or 0300 777 2292. They will then pass this information on directly to regulator.

A free fly-tipping reporting App is also available to use. Set up initially to try and help combat fly-tipping by providing a fully national system and raise awareness of the issue and it is run independently from regulators and councils and now operates to help source legitimate and licensed waste carriers. More on ClearWaste here.

Waste must be collected by a licensed or registered waste carrier and taken to a suitable waste management site. Fly- tipping containing asbestos must only be handled by people trained and in some cases licensed to do so. The HSE leaflet ‘How to deal with fly-tipped asbestos waste’ is useful for forestry managers to reference. www.hse.gov.uk/pubns/ guidance/a38.pdf

Fly-tipping containing asbestos (as shown in the picture above) must only be handled by people trained and in some cases licensed to do so. 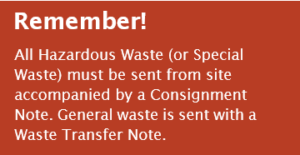