Tilhill has recently been awarded a £1.2million, 34–week, landscaping contract as part of the restoration project for The Canons House & Grounds by London Borough of Merton Council.

Overall Tilhill is responsible for:

The site of the Canons House and Grounds has an interesting and varied history. The site was once the location of a farm associated with St. Mary Overy and the Diocese of Southwark; it is believed the dovecote and the pond date from this medieval period. The house was built in the 1680s and follows a simple architectural plan of the early Georgian period.

The Cranmer family, very well known in Mitcham, owned the house through its history from its construction until the family sold it to the council in 1939. Over the years, the house has had a variety of interesting tenants – including a well-known cricketer and an East India Company merchant – and the house could tell us many more stories besides!

After the house and grounds were sold to the council, the house served both the ARP (Air Raid Precautions) and the Home Guard during the Second World War, while the grounds were dedicated to allotments.

In the latter half of the 20th century, the grounds served as a tree nursery and arboretum meaning the diversity of trees at The Canons cannot be found anywhere else in the borough of Merton.

Below is a run through of the work updates so far: 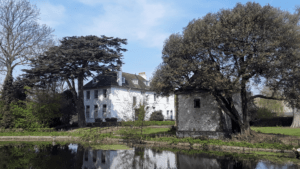 The origin of the fishpond is believed to be medieval. Monastic communities kept fish ponds to provide themselves with fresh fish. The pond was incorporated into the garden when the house was built in 1680. During the 1960s it was cleaned and restocked with Carp.

The partial draining of the pond was essential in order to assess the silt and check for pollution. Tilhill is also carrying out ongoing ecological assessments of the pond throughout the works. The results will help with deciding the level of works needed to create the most supportive habitat for wildlife such as the ducks, moorhens and coots.

After our initial works to the pond it was immensely satisfying to see that the wildlife was thriving during a recent site visit. The Eurasian Coot in particular, with its distinctive white beak and ‘shield’ above the beak which earns it the title ‘bald’. Their feet have distinctive lobed flaps of skin on the toes which act in the same way as webbed feet when swimming. It patters noisily over the water before taking off and can be very aggressive towards others which was most apparent during the site visit.

The Coots at The Canons have created nests and the adults and their juveniles are living happily in the slightly reduced pond levels which will be refilled once the necessary works have been carried out and there is no danger to the nesting birds.

The works have revealed an invasive weed which has spread significantly across the pond. John Allen, Tilhill’s Project Manager identified the weed to be Floating Pennywort (Hydrocotyle ranunculoides) which is deemed an invasive species under  Schedule 9 Part 2 of the Wildlife & Countryside Act 1981; This means we need to control the plant and ensure that our actions prevent it spreading.  Its removal will be a major part of rebuilding the pond in order to make sure it has been eliminated.

Leaving the Pennywort to return and spread every year would have had serious implications for the future of the pond and the wildlife that visits it.

Tilhill is looking forward to completing the pond restoration with more added features which will most certainly improve this wonderful habitat even further.

As shown in some of the recent site photos, there is a very clear separation between the pond and the car park works with the work being partitioned off and important machinery placed nearby such as an interceptor tank; this tank traps oil that could enter the surface water drainage systems from the car park and filters it.  This is essential for protecting the environment and preventing pollution. John explains more in his video update.

You can read more about Tilhill’s environmental credentials here.

The track was built in 1924 and was known as the ‘News of the World Sports Club Running Track’ as it is was located on their sports ground. The first track manager was the famous runner Walter George. In 1940 a relay race took place on the track which was interrupted by an air-raid! Mitcham AC (now Sutton & District AC) was based at the track until the early 1960s when they moved to what is now the Sutton Arena in Carshalton. Some international athletes who trained at the track included high-jumper Dorothy Tyler (nee Odam), Jennifer Pawsey (nee Taylor), long-jumper Jennette Towel (nee Neil), sprinter Jill Bamborough (nee Hall) and middle-distance runner Ann Smith. The track was bought by Merton Council by the early 1970s for use by schools.

The track is being restored as an historic feature which supports an array of informal uses from learning to ride a bike to socially prescribed healthy walks and the occasional run. More updates to follow.

The walled garden was reduced from its original size when Robert Cranmer took over The Canons in the 1760s. Walled gardens provide a micro-climate for protecting tender plants and shelter for the produce grown for the mansion.

Works have already begun with improving the wall. It has been widened to place attractive pillars to provide a two and half meter wider entrance enabling a panoramic vision through from the Canons car park, through the new Canons Café through to the Leisure Centre and to create a new and improved urban pedestrian route. This will result in a much more welcoming and grander entrance to the new park.

New flexible porous surfacing will be installed around the retained trees to ensure tree roots are protected and that the trees can thrive while at the same time providing suitable pedestrian access for visitors.

Tilhill will be designing and Installing a new playground located in the existing north car park including new safety mats and resin bound gravel surfacing.

Tilhill has selected Studio Hardie to design and build the play area. They specialise in a diverse variety of unusual, high profile projects in many disciplines, including architecture and playgrounds placing emphasis on sustainability and integrity.

Below is a picture of the wooden playground created in their workshop –The toddler area for The Canons in Mitcham were designed by children from local schools and the Mitcham shine in collaboration with Mitcham Town Community Trust  and Mitcham Cricket Green an inspiring and strong local community. 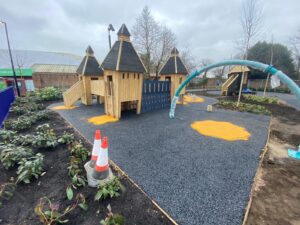 The Trees at Canons House & Grounds
Tilhill’s love of trees and expertise shines through our landscaping works. John Allen Tilhill’s Southern England Area Manager gives local stakeholders a run down of the most prominent trees that are being protected at The Canons House & Gardens restoration project. Watch on Facebook here: https://www.facebook.com/watch/?v=751081205704820

We look forward to sharing more updates in the future.

For more information on this project please feel free to get in touch: