You are here: Home / Resource Hub / Our News / Nesting Birds

Work over the next few months must be planned to take account of nesting birds and avoid delays and rescheduling.

Breeding season for birds starts in early February becoming busier in March and running on into late summer.

Last year we had a number of reports of nesting birds found on site resulting in delays, having to stop work or establishing additional buffer zones.

The majority of reports we receive tend to be in early May and at least half of them last year involved strimming operations with birds found nesting in gorse, ivy and bushes on site.

On all our worksites we must avoid impact on nesting birds and must comply with the regulations protecting them.

All wild birds are protected by law throughout the UK when they are nesting. It is illegal to kill or injure any wild birds or damage or destroy the nest or eggs. Certain birds are specially protected making it illegal to disturb these species while they are nesting, examples of these on our Forestry sites are some raptors such as Goshawk, Red Kite, Osprey and the White-tailed Eagle.

While some species of birds may be regarded as pests or vermin we must not kill or destroy these bird’s nests or eggs unless we have a licence to do this. Anyone being granted a licence must also be able to clearly demonstrate that they are doing it for certain specific reasons including preventing the spread of disease and preserving public health or public safety.

More than 400 species of birds are regularly recorded in the UK, these include both resident breeding species and migrants. Species show different preferences for nesting but – as we found last year – most birds are more likely to nest in scrub or hedgerow.

What to look for before work starts: 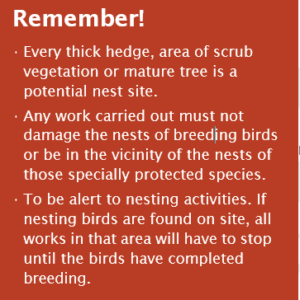 There are a number of Toolbox Talks available on breeding birds and raptors.

Managers should also be familiar with our Guidance Notes: