I’m A Celebrity – Get Them Out Of Here!

‘Police investigating I’m A Celebrity show in North Wales’ was a recent headline when a BBC Springwatch presenter questioned the use of bugs and insects by the Show and the potential for their release into the Welsh countryside.

It was confirmed by the Show that all insects were ‘non- invasive species’ only ever released in a contained area and collected immediately after the filming.

However, it was an important point and one highlighted this month in INVASIVE NON-NATIVE SPECIES WEEK 2021. The week runs from May 24th and more information can be found at http://www.nonnativespecies.org/ or Twitter: @InvasiveSp

Invasive non-native species harm the environment and wildlife, are costly to manage and pose a risk to our health and way of life.

What are invasive non-native species?

A non-native species is one which is transported from its native range to a new region with assistance of humans. Invasive non-natives are those that have a harmful impact.

How many are there?

Around 2000 non-native plants and animals have been introduced to the UK from all over the world.

Most non-natives are harmless but around 10-15% of these have become invasive.

There has been a dramatic increase in numbers over recent years with ten new species becoming established in 2017. Invasive species are easily spread, for example Japanese Knotweed spreads so rapidly not only through its root system but because any fragment of its stem or root will grow to form a new plant. This makes it very difficult to get rid of.

What are the problems?

They have a range of environmental, economic, health and social impacts in Britain.

Harm to the Environment: Worldwide they are one of the greatest threats to biodiversity, even more so than pollution. In Britain they threaten the survival of native wildlife, spread harmful diseases and damage our natural ecosystems. For example Japanese knotweed will grow in any soil no matter how poor and quickly invades the spaces shading out native plants.

Economic impact: Problems caused by these species cost at least £1.7 billion every year in Britain. Costs include damage to infrastructure and losses to production. For example crops including forestry and agricultural.

Health and social impacts: They can also affect our health and the way we live. Some species such as Floating Pennywort make flooding worse. Others are a health hazard such as Giant Hogweed, which causes skin burns, and Oak Processionary Moth which causes skin irritation and respiratory problems.

What can we do?
•  Prevent them from establishing. Take precautions to prevent spread from site to site.

•  Detect and rapidly respond if they are found on our sites.

•  Where they have become established plan to manage and control to prevent spread and eradicate.

•  Be Aware and Report: You should be advised as part of any site work instruction if there are invasive non-native species on site and what precautions are needed.

•  If you come across any that haven’t been identified, make sure you report to the Tilhill Forestry Manager.

What did happen to all those bugs and creepy crawlies from I’m a Celebrity Get Me Out of Here?

Just in case anyone was wondering, the show maintained the insects were used only in contained areas, were collected immediately after filming and donated to local wildlife sanctuaries, trusts and zoos for feed after the filming. So, they did Get them out of There! 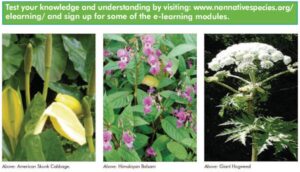