The Highway Code is set to undergo a major shake-up.

The Highway Code revisions include a new Hierarchy of Road Users, which implies automatic culpability for drivers in accidents with more vulnerable road users (cyclists or pedestrians), while another change states drivers should stop and give way to pedestrians waiting to cross the road before turning into or out of junctions. The final major change will be establishing guidance on safe passing distances and speeds when overtaking cyclists or horse riders.

Rule H1: New Hierarchy of Road Users (above). Drivers of vehicles that can cause the greatest harm in the event of a collision bear the greatest responsibility to take care and reduce the danger to others. This principle applies most strongly to drivers of HGVs, LGVs, cars/ taxis and motorcycles. Cyclists and horse riders likewise have a responsibility to reduce danger to pedestrians.

Rule H3: New priority for cyclists when cars are turning. You should not cut across cyclists, horse riders or horse drawn vehicles going ahead when you are turning into or out of a junction or changing direction or lane. This applies whether they are using a cycle lane, a cycle track, or riding ahead on the road and you should give way to them. Do not turn at a junction if to do so would cause the cyclist, horse rider or horse drawn vehicle going straight ahead to stop or swerve. You should stop and wait for a safe gap in the flow of cyclists if necessary.

Several other new rules have been introduced to further clarify when pedestrians have priority on the road. Cyclists are advised to take care when overtaking pedestrians and horses by slowing down and alerting them using their bell.
Cyclists are also now advised to ride in the centre of their lane to make themselves more visible on quiet roads and in slow moving traffic, or on the approach to junctions when it would be unsafe for a vehicle to overtake.
When riding a bicycle on faster moving or busier roads, it is advised that you leave enough space for drivers to overtake when it is safe to do so.

For those opening the doors of parked vehicles, Rule 239 has also been updated to include what is often known as the ‘Dutch Reach’. When you are able to do so, you should open your vehicle door using your hand on the opposite side to the door you are opening. In doing so, this forces you to turn your body and your head, better enabling you to check over your shoulder and your blind spot.

The gov.uk website has more information on the new rules. 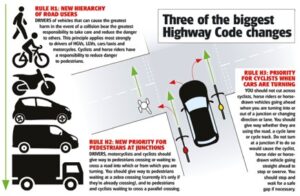