HSE has released the fatal accident statistics for agriculture, forestry, and fishing for 2020/21.

They make very sobering reading with 41 people having lost their lives in the sector during the last financial year.

• 2 workers were killed during tree felling, both from a falling tree or part of a tree.

• 7 people killed when the ATV Quad they were riding overturned.

• 8 people were killed interacting with their machinery whilst out of the operator’s seat, many were found with the machine engine still running.

• 3 people were killed when struck or trapped by a machine operated by another person, when in the risk zone of the machine.

Each of these numbers represent a family, group of friends, and/or colleagues that will have been devastated by the loss of their loved one or someone they knew well. None of these people set out that morning thinking they would have a fatal incident.

It isn’t just your life that would be changed if you were seriously hurt or killed at work.

Yesterdays near miss could be today’s fatality. A fatality is not a big event until it happens, it is likely your day is proceeding like any other until an incident occurs. The outcome of an incident can be dictated by tiny differences on the day.

Every day, and for every task you complete, stop and think about what you are going to do. Ask yourself if you have done everything you can to prevent yourself or your colleagues from being injured?

Ensuring risk zones are clear whilst working, switching off the engine before working on the machine or even just going and fetching those safety glasses can save you a life changing injury or worse. 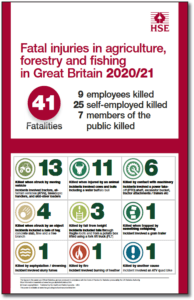