Ash Dieback (ADB) is thought to have originated in Eastern Asia where it naturally exists. It was first reported in Europe in 1992 in Poland from where it spread across mainland Europe, jumping the English Channel in the process. It was first confirmed in the UK in 2012 although it is thought it could have been in the country as early as 2004-2005 most likely having been imported either on planting stock or from spores on the wind and carried by people.

ADB is now prevalent across almost all of the UK. The latest Forest Research map published in April 2019 shows ADB present in 69% of all 10 x 10km grid squares in England and 85% of all grid squares in Wales. 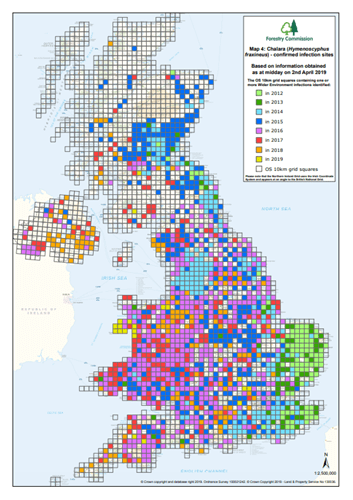 This spread will almost certainly have been facilitated by both human and non-human factors. The spores of the fungus are incredibly small so can be easily carried long distances on the wind but equally as easily on shoes and clothing that have been exposed to diseased areas.

In Southern England, where the disease is most established, it has now progressed to produce severe symptoms on many trees. Indeed, many will have noted the partial and late onset of ash trees coming into leaf this spring and summer. Ash is often one of the last species to flush but this year there seemed to be many noticeably sparse crowns. 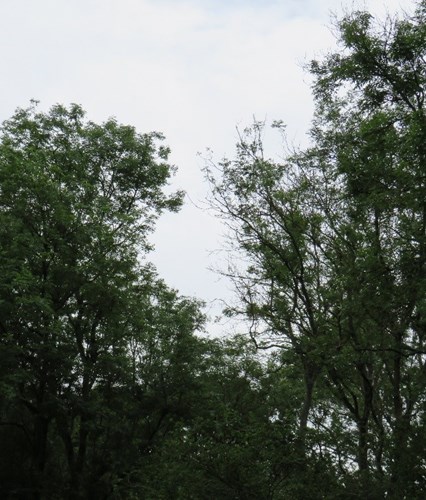 Sparse crowns are a strong sign of ADB infection and that the normally healthy tree tissue is dying. This results in the formation of deadwood that becomes a serious hazard due to its propensity to break away from the tree and fall. This can cause serious injury to anyone underneath the tree at the time.

Because of this risk, and the onward risk of the whole tree falling, many land owners are asking us to clear their ash when situated close to public rights of way and other areas of high public access. 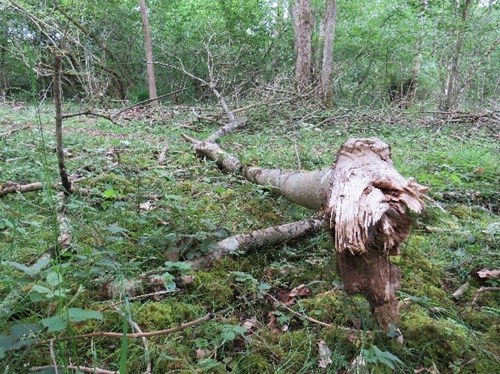 (Figure 3 A large branch from an infected tree fallen across a path.)

Felling infected trees can present its own issues in that the tree can react very differently to usual as the infection causes necrosis throughout the structure of the tree. Secondary infections can further weaken the tree increasing the risk of failure. Mechanical aids equipped with armoured cabs should be used wherever possible to protect operators from falling debris.

Best practice should not include blanket felling of all ash trees. Those that present no significant risk should be left standing. Retaining as many ash as possible will be important in finding resilient genetics and maintaining a host of other environmental benefits.

End products for infected trees can still include firewood and biomass if the infection is not too far progressed. However, getting into higher value markets is unlikely due to the staining of the wood.

Tilhill manage many ash trees across the country. As part of our service we frequently inspect the trees for signs of disease and risk to the public.

Regular tree surveys are carried out using our qualified tree inspectors for a variety of clients including private and public bodies. The frequency and targeted areas are always reviewed as diseases such as ADB affect new areas.  We follow up these inspections with carefully considered arboriculture works and felling operations from start to finish ensuring the work is done safely and maximising the value of the timber.

We have recently removed dangerous ash trees from a 500m stretch of a client’s property that bordered a public road. For this we used new purpose-built machinery that carried out the job quickly and efficiently minimising both the cost to the client and the risk to those carrying out the work.

Tilhill also has experience managing young ash plantations that, unfortunately, are so heavily infected that the trees are unable to produce a commercially marketable product. Grants are available from the Forestry Commission for restocking these areas with an alternative species. We specialise in the most efficient removal and replacement of these areas avoiding any unnecessary costs and disruption to the client.

Once all the infected trees have been removed Tilhill can advise on the most appropriate species to restock with. Whether it be a productive forest, or a conservation based broadleaved woodland, or have aspects of both, Tilhill is an expert in the field.

Alex Mackinnon, New Business Manager Said: - “Any infected ash tree close to public rights of way should be scrutinised by a professional and be closely observed for deterioration over time”

Forestry Commission Says: – “Public safety is likely to be one of the biggest management issues for owners of ash trees in woodlands and parks and alongside roads, railways, footpaths and carparks etc as the disease kills or weakens trees”.

Kasten Harris,  Forest Manager – “Many people are finding the rate of decay in the trees is much quicker than anticipated”